Sometimes what makes us unique is what makes us beautiful. Genetic mutations do not always equate to ugliness. They can make us beautiful people. The same goes for animals. They have genes just like us. When those genes mutate, some of the most beautiful animals on earth are born.

Animals have even more features to mutant than humans. Things like scales, fur, feathers, manes and a list of other features make mutation possibilities endless. Just imagine all the different combinations.

These are the types of animals this article focuses on. The ones that came out looking different from their brothers and sisters. Prepare to be blown away as you see the beauty that these unique genetic mutations produced!

1. The Dog pictured here has a beautiful, spotted coat with some awesome looking ears!

2. Betta fish already look cool, but this little fishy has some of the coolest betta colors on the planet.

3. Have you ever seen a macaw so yellow? This bird has a rare case of xanthochromism which causes an abnormally high amount of yellow pigmentation in the feathers.

4. Imagine if two animals became one, that is what chimeric animals are.

A genetic mutation causes two or more fertilized eggs to become fused together while still in the womb. The outcome is what you see here. Instead of coming out as twins, the twins were made into one bird.

5. Pictured here is a chimeric version of a Labrador.

The dog became a black and yellow Labrador in one. Chimeric animals also have two full sets of DNA.

6. Feast your eyes on the silver morph ball python.

This mutation is one of the rarest on the list!

7. It’s hard to believe this turtle is real!

You may think he is albino, but in actuality parts of his body are completely void of color. The term for this condition is leucism.

8. Notice how half this peacock’s tale has color. 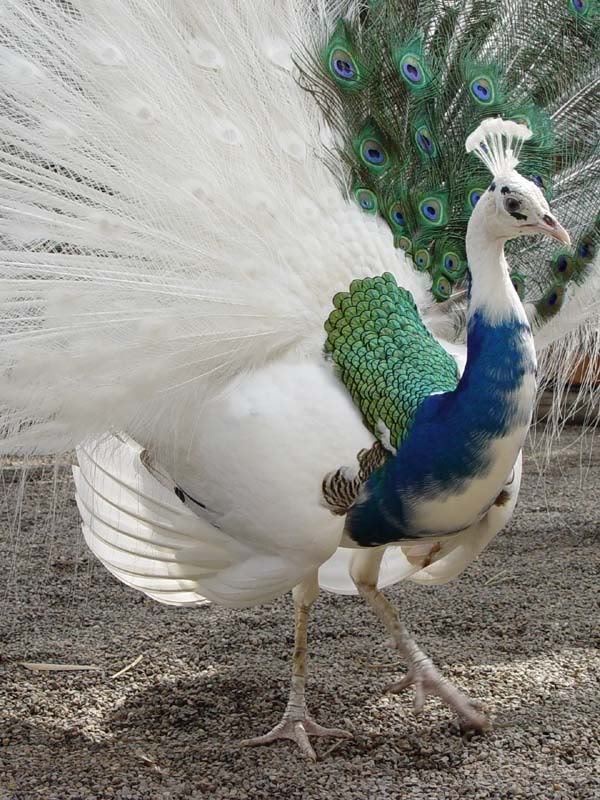 9. Here is another leucistic peacock with only a splattering of vibrant blue across its chest.

10. In this beautiful photo, you get a side by side comparison of a leucistic lion and a normal colored lion.

11. There is an opposite to leucism known as melanism.

The mutation creates more color instead of less. The barn owl pictured here got its unique coloring from melanism. The white owl in the background is the normal variation.

12. When zebras have melanism the result is a breathtaking color pattern.

The condition only affects the black striped sections of the zebra.

13. This may be the most unique squirrel alive.

He has a partial melanistic color pattern.

14. A condition known as vitiligo affects both the color of the fur and skin.

Notice how distinct the color patterns are on this gorgeous Rottweiler. His eyebrows are completely unaffected.

15. Here is an example of a German Shepard with the same condition.

16. This pup has the same wild coloring from vitiligo.

17. Sometimes a zebra’s stripes can turn into spots.

It makes them easier to find.

18. Cheetahs’ spots can change from mutation.

Here is a rare type of cheetah with tiny freckle spots.

19. Another variation of cheetah is completely void of spots.

The cheetah on the right is a king cheetah. You can easily see the difference in its pattern when compared to a normal cheetah. Kings have the large stripes down the middle of their backs.

21. Pictured here is another magnificent king cheetah. They are extremely rare.

Only five reported sightings in the wild have been reported since the 1920s! The first photograph of the king was taken in 1974.

22. Have you ever seen a leopard with such a pronounced color pattern?

23. The prized Dubar’s Gold is a rare version of the brindle horse.

24. It almost looks like white paint was splattered on this horse, but it’s actually the natural coat.

25. Deer can sometimes have piebaldism.

The mutation is extremely rare; it causes an appearance of albinism on parts of the animal.

26. Imagine seeing this unique piebald moose in the wild, he is an incredible sight.

27. Reptiles can also have piebaldism. Here you can see how sections of the python’s body were affected.

28. Birds are affected by piebaldism too. Here is a beautifully colored raven.

29. When dolphins have piebaldism, they take on the look of a miniature killer whale.

They are sometimes called “panda dolphins.”

The insect has a case of erythrism which causes a unique, reddish pigmentation in the affected animal. Unfortunately, the beauty is usually a burden. The vibrant color makes them more susceptible to attacks from predators.